Microsoft is slowly rolling out the new Windows 11 2022 update to end-users; unfortunately, there are many reports that there is an issue with GeForce graphics cards, in specific some users even see 120 FPS framerates drop to 30 FPS.

Users also report screen tearing and Nvidia G-Sync not working. From the looks of things, debug software comes along with the new windows update and gets triggered with graphics cards causing the problems mentioned above. Although Microsoft has yet to issue a statement, it appears that Nvidia is already aware. A poll questions variables, such as screen size, game, or API, on Reddit.

Nvidia confirms in its forum that new debugging tools introduced in Windows 11 22H2 are currently triggered and activated. Nvidia proclaims it is developing a fix, but no timeline has been provided. If you own a GeForce graphics card, you probably want to skip and delay that update until this is fixed. 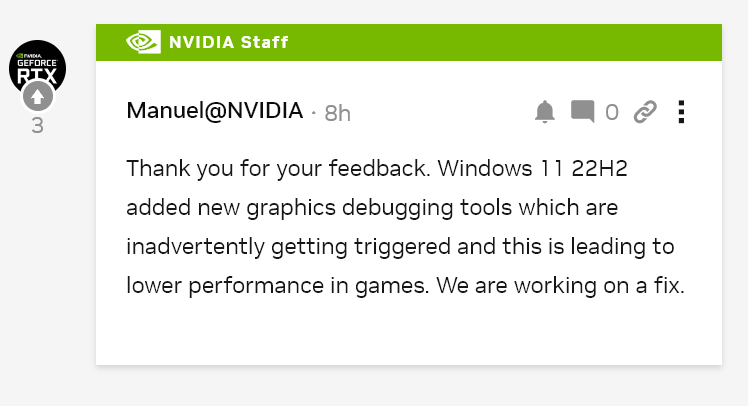